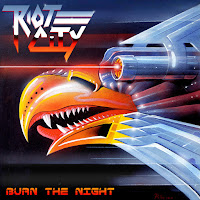 Better late than never and we kick off the top albums of 2019 with a real treat, as we welcome the debut of Canadian Heavy Metallers Riot City.  It has been said that you should not judge a book by its cover. But when the cover could be an alternative  for "Screaming For Vengeance" then maybe the ol' proverb has found its true exception! Riot City hail from Calgary, Canada and are a 4 member band first formed around 2011, apparently to become the best US power/speed band in the world. "Burn the Night" is only 37 minutes long and is made up of pure fresh heavy metal elegy.  The disc is always heard in one take and the hand rarely stays away from just pressing the repeat button. The eight tracks of "Burn The Night" are really one of a kind. There are no fillers here. Only killers. There are no favourites, for in times when the majority of releases have only one to two decent tracks, here we are talking about an album full of great REAL heavy metal songs. Can anyone listen to "Warrior Of Time" or "In the Dark" and not be on board immediately? No fokin way. Riot City takes all this stuff we love in our music and brings it to 2019. They are not retro, but at the same time do not rely on "modernisms" to sell their music. Simply put: "Burn The Night" is not just an album you need to listen to sooner rather than later, but an album that in a few years time will be recognised as a true classic of its kind.

Below is the lyric video for heavy metal hymn "In the Dark".