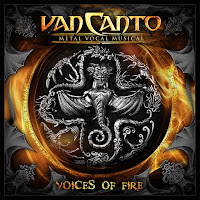 No introduction is needed for the unique a Capella metal band, Van Canto, who continue differentiating from the initial path of covering songs to making their own music with the power of their voices (and a drummer)! The captivating narration by the amazing actor John Rhys-Davies that starts/ closes the record and binds the songs together (best known as Gimli) adds to the epicness of the album.
The band moves from quick-paced epic songs like the blasting "Battleday's Dawn", the chorus-based "Dragonwake" (which starts off low key before turning into a blasting song) and the intriguing "Time and Time Again" (with its more groovy vibe)! However, it doesn't end there, as there are more highlights of the album in the second part with the multi-layered "The Oracle", the powerful "The Betrayal", the catchy "The Bardcall" and the amazingly structured "To Catharsis" showcasing perfectly what Van Canto are amazing at doing, making the listener want to sing along both the lyrics as well as the backing vocals! Rakkatakka!

Below is the official music video for "The Bardcall".

Posted by the golden general at 21:18 No comments:

Email ThisBlogThis!Share to TwitterShare to FacebookShare to Pinterest
Labels: A Cappella, Power Metal 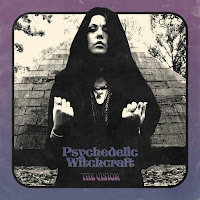 Psychedelic Witchcraft is an Italian band which perfectly balances doom, blues and (of course) psychedelic rock elements with their debut album! "The Vision" is an impressive debut album showing the band's unique sound and attitude. It sets the mood with the amazing guitar riffs of "A Creature" before moving to the bluesy and catchy "Witches Arise"! Throughout the record the captivating vocals by Virginia Monti, the diverse guitar riffs by Jacopo Fallai and the powerful drums by Mirko Buia, elevate the songs, adding their touch to the classic 70's psych blues vibes! There are a number of elements dominating each song, with examples like the energetic "Demon Liar", the psychedelic "Wicked Ways", the darker "The Night" and lighter ballad-like "The Only One That". The hard-rocking "War" and the genuinely catchy "Different" wrap up the album which ends with the "Magic Hour Blues", a solid ending to a great album full of psychedelic sounds and occult themes. An amazing first step to a a journey into the occult psych rock path!

Below is the lyric video for the song "Magic Hour Blues".

Posted by the golden general at 09:41 No comments:

Kai Hansen has been in the epicentre of power metal music for almost three decades now; whether from the position of Helloween's Guitarist, Gamma Ray's Singer-Guitarist or supporting other bands in their first steps. This album serves as a retrospective for Hansen, with a narrative following his long career and the hurdles he had to overcome in his way to becoming who he is today. Along the way, a number of his friends and collaborators over the years also pitch in to give this album a celebratory tone worthy of Kai Hansen's long career. Piet Sielk (Iron Saviour),Ralf Scheepers (Primal Fear, ex-Gamma Ray), Dee Snider (Twisted Sister), Tobias Sammet (Edguy), Michael Kiske (Place Vandome - ex-Helloween), Roland Grapow (Masterplan, ex-Helloween), Hansi Kursch (Blind Guardian), Marcus Bischoff (Heaven Shall Burn) and Michael Weikath (Helloween) are only some of the names guest starring in this ambitious project, all paying their tribute to their mentor or comrade. A fantastic power metal experience worth having a listen for all fans of Kai's long career. Here's to the next 30!

Below is the music video for "Born Free"

Posted by PhantomOfTheOpera at 11:57 No comments:

Devin Townsend Project - Transcendence (Inside Out) 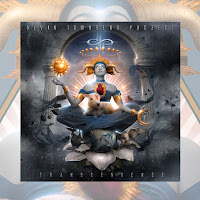 In the lucky number 13 for 2016, we have the latest endeavour from Devin Townsend Project. After a short break from new material in 2015, Devin is back and, as always, delivering the goods.
The album starts with the chorus-heavy "Truth" (a rendition from the Infinity album) with Anneke van Giersbergen (DTP's usual partner in crime) singing first with Devin's vocals joining in later as the song finishes abruptly, reverting to soft whispers, leading directly to "Stormbending". This is a very "typical" DTP song with Devin's soft vocals taking central stage, before a guitar-driven part of the song which directly leads back to Devin's singing concluding with the chorus joining in, creating a very spiritual ending to the song with the chorus and Devin singing together. "Failure" is a more heavy song - starting with the bass and the drums and leading to an amazing riff. The choral part of this song is superb and is definitely one of the "hits" of the album. An instant classic composition! "Secret Sciences" is a more prog-oriented pieces with with keyboards having a strong influence on the melodic lines and off-tempo riffs contributing to a very metal piece with a beautiful solo at the 4 minute mark. The rest of the album flows beautifully with "Stars" and "From the Heart" being highlights of the second  half. The closer "Transdermal Celebration" is a cover, but despite that, it matches the mood of the album and constitutes a very good closing statement to another engaging record by Devin and co.


Below is the music video for "Stormbending".

Posted by PhantomOfTheOpera at 17:05 No comments:

Sellsword- ... And Now We Ride (Independent) 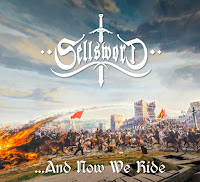 In number 14,  we are introduced to Sellsword, an epic heavy metal band coming from "the barren plains" of Yorkshire. They  released their debut album "... And Now We Ride" in 2016 independently, and it is truly one of the best albums of epic metal music to come out of the UK for ages! After the mood is set with the intro "...and Now We Ride", "The Warrior" gives the listener the first taste of epicness, while the "Battleground" gives a heavier note! The mix of epic and heavy elements is successful thanks to the lead vocalist's powerful voice (Stuart Perry), the melodic riffs (by Henry Mahy and Jacek J. Mazur) and heavy drums (Alex Brandsen)! The epic element is present throughout the album  with a number of highlights including the amazing "Rise and Take Command", the "Against the Wind" (with its awesome sing-along chorus!), the riff-based "Ashen Hand" and "The Siege"! The record concludes perfectly with the interesting and more theatrical "Meet Your Maker" in all its over-10-minutes glory! In its mission to conquer the world, this Mercenary metal band is bound to capture the interest of all power metal fans with their debut album! Hopefully this is only the first quest of this band of Barbarians!

Below is the lyric video for the song "Against The Wind".

Posted by the golden general at 17:55 No comments: 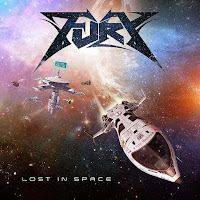 Fury are a four-piece heavy metal band from Worcester UK, that in 2016 released their second album from a small local label. Despite their relative obscureness in the worldwide scene, they have been well-established in the local circuit for years and have been building on their good local reputation to branch out and play in more and more venues around the country. This album is their best effort yet and among the most genuine albums released in 2016. Hearing Fury you can tell that these guys are genuine and not another boring copycat label band playing the same things that used to sell last year. The album kicks off with the epic titular track with the warm inspiring vocals of Julian Jenkins and keeps you invested throughout its duration with songs that range from really heavy old-school tracks (like "Sons of War" & "Star Trippin'" ) to a really epic anthem ("A Tale of Silver") which acts as an epilogue to this inspiring heavy metal tale. A real gem worth a listen by all fans of real heavy metal.

Below is the audio for the title track.

Posted by PhantomOfTheOpera at 19:18 No comments: