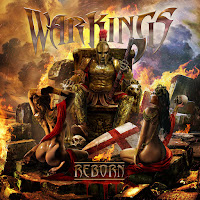 Warkings is an international melodic power metal band which has released its first full length album in 2018, "Reborn". It initially received some negative publicity due to the heavy promotion it received by Napalm Records, the Manowar inspired album cover and the choice of the band members to remain anonymous by wearing masks and using different names such as the Viking (bass), the Spartan (drums) and the Crusader (guitars). Since the release of their first single (Gladiator), the lead singer Tribune was been identified as Georg Neuhauser, lead vocalist of Serenity. However, the album has had a more positive response once people started to have a listen and now it has been hailed one of the better albums of its genre for 2018! The record kicks off with the super-catchy and quick-paced "Give Em War" which has a great sing-along chorus (which is the case for most of the songs), followed by  the heavier "Never Surrender". The more theatrical "Hephaistos" and the instant-hit "Gladiator" which follow are definitely two of the highlights of the album as they both have riffs and lyrics that are meant to make an impression. "Holy Storm" showcases some great guitar work while "Battle Cry" has a more melodic chorus (despite the ultra-manly heavy-riffed intro of the song). The blasting "Fire Falling Down" leads to "Sparta", perfectly blending clear with growling vocals. The album wraps up with "The Last Battle" which has an amazing guitar interlude and the melodic/acoustic "Die Flut" which is entirely sung in German adding. A very promising debut, that despite the, perhaps needless, theatrics succeeds in delivering a great melodic heavy metal output.

Below are the official music videos for "Gladiator" and "Sparta".

Posted by the golden general at 20:24 No comments: 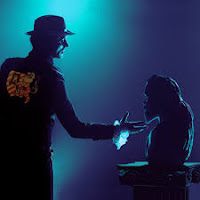 After their excellent previous effort (Feathers and Flesh), Avatar released their 7th album on January 2018, going again for a unifying album concept! The story here revolves around the King of Avatar Country and his rule over its dominion. The album kicks off with acoustic interlude "Glory to the King" and breaks into the melodic death metal "Legend of the King", which is about the most straightforward track you are gonna find in the album. "The King Welcomes You To The Avatar Country” leans towards Country rock avenues with clear influences from AC/DC, while "King's Harvest" sounds like a bastard son from the backlog of The Haunted that got remastered from Devin Townsend while hanging out with members of Faith No More. "The King Wants You" is more within the melodic range of a "typical" Avatar song, but remains a very groovy and upbeat piece of music. "The King Speaks" is a REALLY weird and random interlude that acts as a break before the second part of the album.  The next two tracks "A Statue of the King" and "King after King" are probably the best bit of the album combining elements that have made Avatar such household names in the last years, mixing melodic passages with sheer guitar brutality and the theatrical flair that has truly elevated Avatar above the rubble of the current music scene. The album closes with two awesome instrumental passages and clocks at under 45 minutes. This is probably the only fault of the album, it sounds truly awesome, but feels as just the first part of something bigger. Nevertheless it is a must listen for fans of the band and a worthy follow-up to Feathers and Flesh.


Below are the music videos for "The King Welcomes You To The Avatar Country” , "The King Wants You" and "Statue of the King".

Posted by PhantomOfTheOpera at 20:28 No comments: 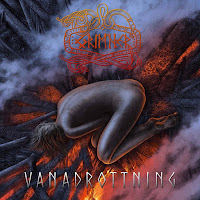 The 2018 Best Albums countdown kicks of with a great viking folk band which released its third full length album year. Grimner march from Sweden showing us that they can blend clean (Martin The Warrior) and brutal (Ted The Jarl) vocals with folk notes from a range of traditional musical instruments and heavy guitar riffs! "En fallen jätte" and "Fafnersbane" are awesome examples of uplifting folk songs that don't need to be in English to make you wanna sing along. The title song "Vanadrottning" has some amazing guitar riffs that perfectly mix with powerful vocals. "En vilja av järn" showcases the folk elements (by Johan The Blacksmith) and the chorus vocals while "Avundas hennes ungdom" and "Dödens dans" are more classic quick-paced folk songs (with great sing-along points). "Kvällningssång" is a highlight of the album packed with awesome flute melodies that are again mixed with great vocals and is followed by the heavier "Vårt blod, våra liv" which some more epic elements to the record. "Ägers salar" adds a more heavy/symphonic note with melodic guitars and great brutal vocals which is followed by the personal favourite of the record "Sången om grimner" thanks to its even more epic vibe! "Freja vakar" is a great finishing touch  (with catchy guitar riffs) that wraps-up this is engaging folk elegy and kick-starts our 2018 top albums countdown!

Below is the official music video for the song "En fallen jätte".

Posted by the golden general at 10:03 No comments: