Crystal Viper is a heavy metal band from Poland which stands out due to the powerful heavy vocals by lead vocalist/ songwriter/ guitar player and performer Marta Gabriel. Possession is Crystal Viper's fifth full album and its concept focuses on a demonically possessed girl who learns about the true nature of her demon (no spoilers), bringing in mind King Diamond-style horror themes! The record is full of heavy/ speedy tunes with songs like "We are Many" that make you wanna sing along to the choruses, along with the"You will die you will burn" with its Maiden-inspired riffs and the personal favourite "Why Can't You Listen?"! The album also has two interesting guests with vocals by Harry Conklin of Jag Panzer in the "Fight Evil With Evil" and growls by Desaster’s Sataniac in "Julia Is Possessed"! "Possession" wraps up with the epic "Prophet Of The End" an amazing cover of Riot's "Thundersteel"!

Below "Prophet Of The End", an awesome music video from an awesome band.

Posted by the golden general at 20:50 No comments: We have already discussed Ghost in the 2015 year in review, and we find them here again, in 2013 with their second release and their first "mainstream"album from a Universal Music subsidiary. First of all, this is arguably their best release to date and the one that can be legitimately considered as their mainstream music breakthrough. What are the differences with their debut? First of all, songwriting seems to be much more refined and sinister, avoiding childish traits of its predecessor. Next, the compositions are inspired by a host of artists from the 70s including but not limited to Blue Oyster Cult and Uriah Heep, making this album more in the territory of melodic rock than metal. It is another milestone in the career of a very good band that although might not have been as popular without their shenanigans, they would still be very good, as far as music is concerned, regardless.

Below is the music video for "Secular Haze".

Posted by PhantomOfTheOpera at 14:22 No comments:

On the lucky number 13 of the list, we encounter the incredible avant-garde progressive metallers from Norway, Vulture Industries. This is their third album, titled elegantly "The Tower", and is an exemplification of the best elements of the avant-garde Norwegian scene and all its elements as well as a vastly superior record, compared with the last two releases of the genre supergroup, Arcturus. Whereas there seemed to be a lack of inspiration in bands of the genre recently, Vulture Industries have that in spades! What's more, going beyond the fanfare and the lyric hyperbole that all albums of the genre are required to have, they actually have really good songs and excellent rhythms, sounding genuinely outlandish, without having to resort to cheap sound effect tricks. Standout tracks of the album include "The Dead Won't Mind", "Divine Appalling", "Lost among Liars" and "Sleepwalkers", but the album has an overall (in)consistent pessimistic and weird tone that keeps you on your tones making you feel like exploring one of the dark, weird and wonderful worlds in one of the Tim Burton movies. Essential album for all the fans of Avant-Garde Metal and an interesting album for proggers who would like to venture into the dark realms of that genre, due to its accessibility.

Below are two music videos from the album, Blood on the Trail & Lost Among Liars

Posted by PhantomOfTheOpera at 16:47 No comments:

Email ThisBlogThis!Share to TwitterShare to FacebookShare to Pinterest
Labels: Avant-Garde 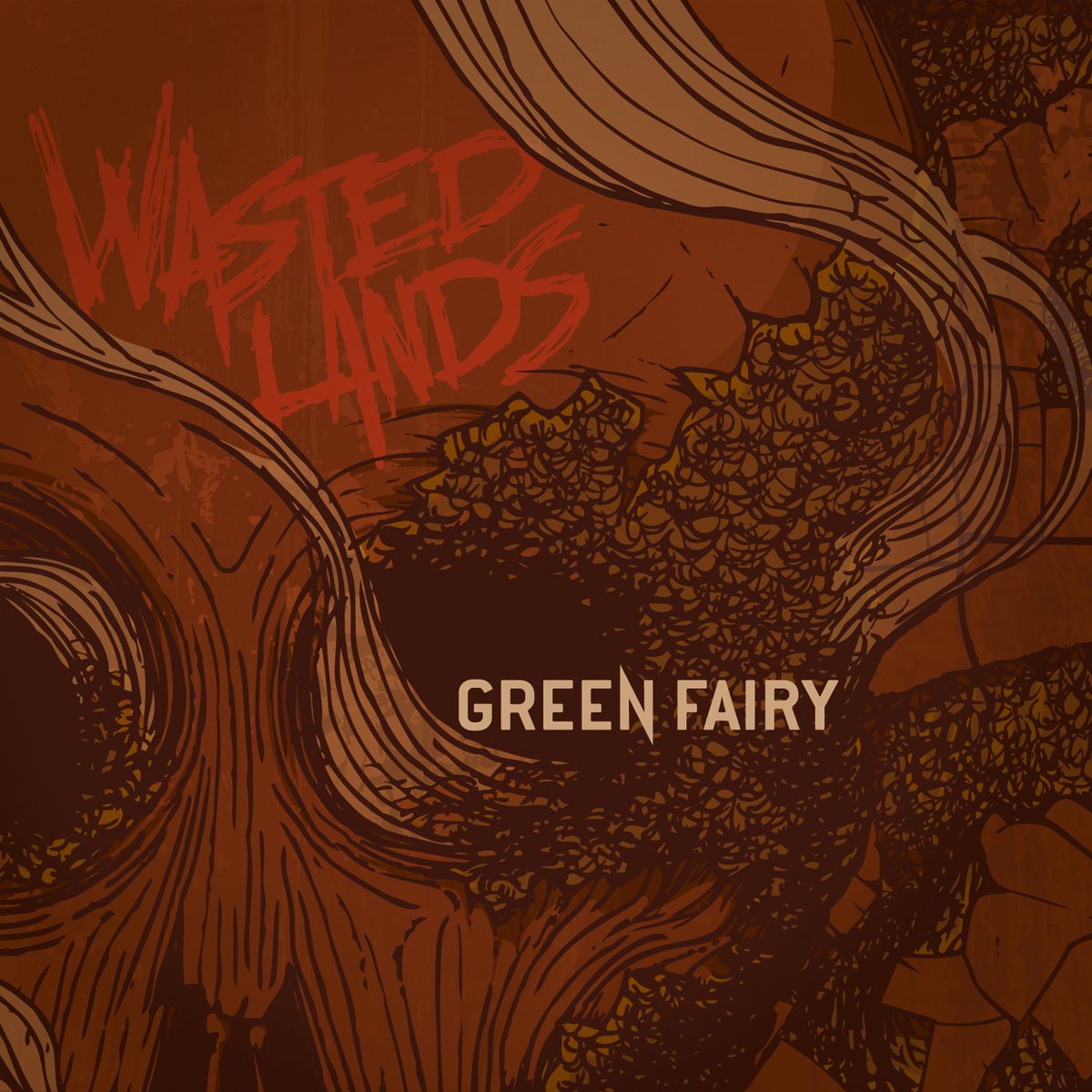 Wasted Land is the second full length album of the Swiss rock/folk band, Green Fairy. The record combines strong rock guitar vibes with great drums and bass riffs creating an interesting retro rock album with rhythms that will stick to your mind. The album opens with "Wasted Lands" starting with catchy acapella vocals by Manu Tarabay and Julien Waraux and adding groovy drums and guitar riffs that have a very strong 70's vibe. "On Bright Days We Fall" follows it up with the addition of acoustic guitars and amazing lead vocals being one of the best tracks of the whole record!  "Lady in Black" with classic rock riffs, "Rock and Roll Suicide" with its groovy vocals, "Red Blue Eyes" with its slow-paced rock elements and "Locked Inside" are also great additions to the album. "Tears of the Sun" is a more interesting and mature song followed by "The Waves" and the "Lost Time Seeker" that wrap up the album with an almost genuine 70's timber. If you fancy retro folk rock, this is one of the best records of 2013 in that genre!

Below is the music video for the song that gave the album its title.

Posted by the golden general at 20:16 No comments: 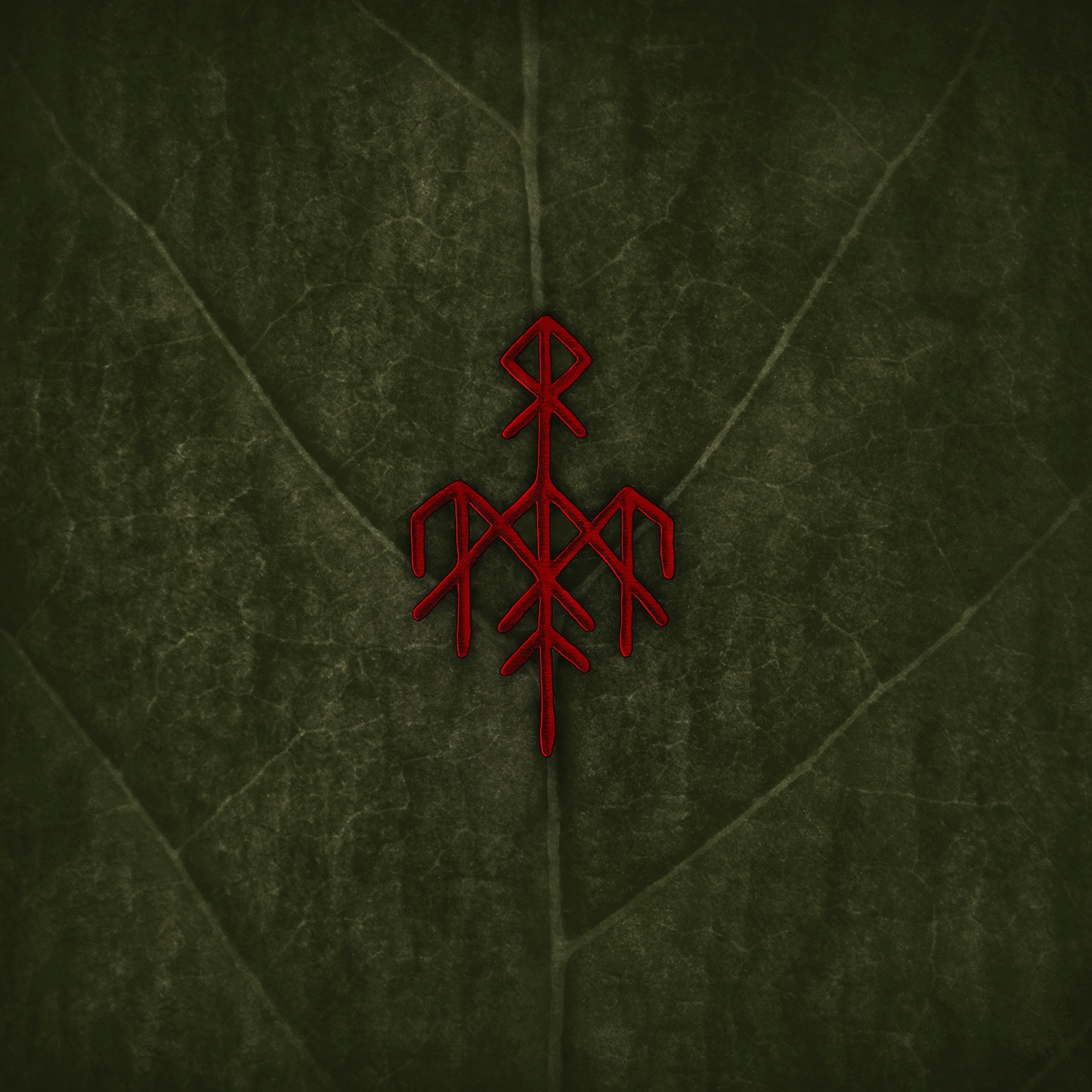 Moving up the top, the next entry is a folk/ ambient project that, although it doesn't qualify as metal or rock, is as epic as  (if not even more epic) any other viking metal album and will travel the listener back to the viking age!! Wardruna is a band that at the time of the album release consisted of male vocalist Gaahl (known as the vocalist of black metal band, Gorgoroth), female vocalist Lindy Fay Hella and multi-instrumentalist and vocalist Einar Kvitrafn Selvik (including instruments such as the Kraviklyra, the tagelharpe, mouth harps, and wind instruments like the goat horn)! According to the Norse mythology, “Yggdrasil” refers to the sacred world tree, an ash standing at the centre of the cosmos holding all nine worlds together! The lack of english lyrics usually counts as a negative aspect but in this case, the native language blends perfectly with the vibe of the music and the feeling that is evoked to the listener, making you feel that you really are listening to the music of the vikings. Of course it was only natural that Selvik is also responsible for the hypnotic music that is featured in the TV series Vikings for US History Channel!This album is the second part of a trilogy that was based on 24 ancient Scandinavian runes known as the elder futhark, and we are impatiently waiting for the third chapter that will be entitled ‘Ragnarok’, referring to the final destiny of the gods!

Below are official audio samples from the album!

Posted by the golden general at 15:19 No comments:

Fates Warning - Darkness in a Different Light (Inside Out Music) 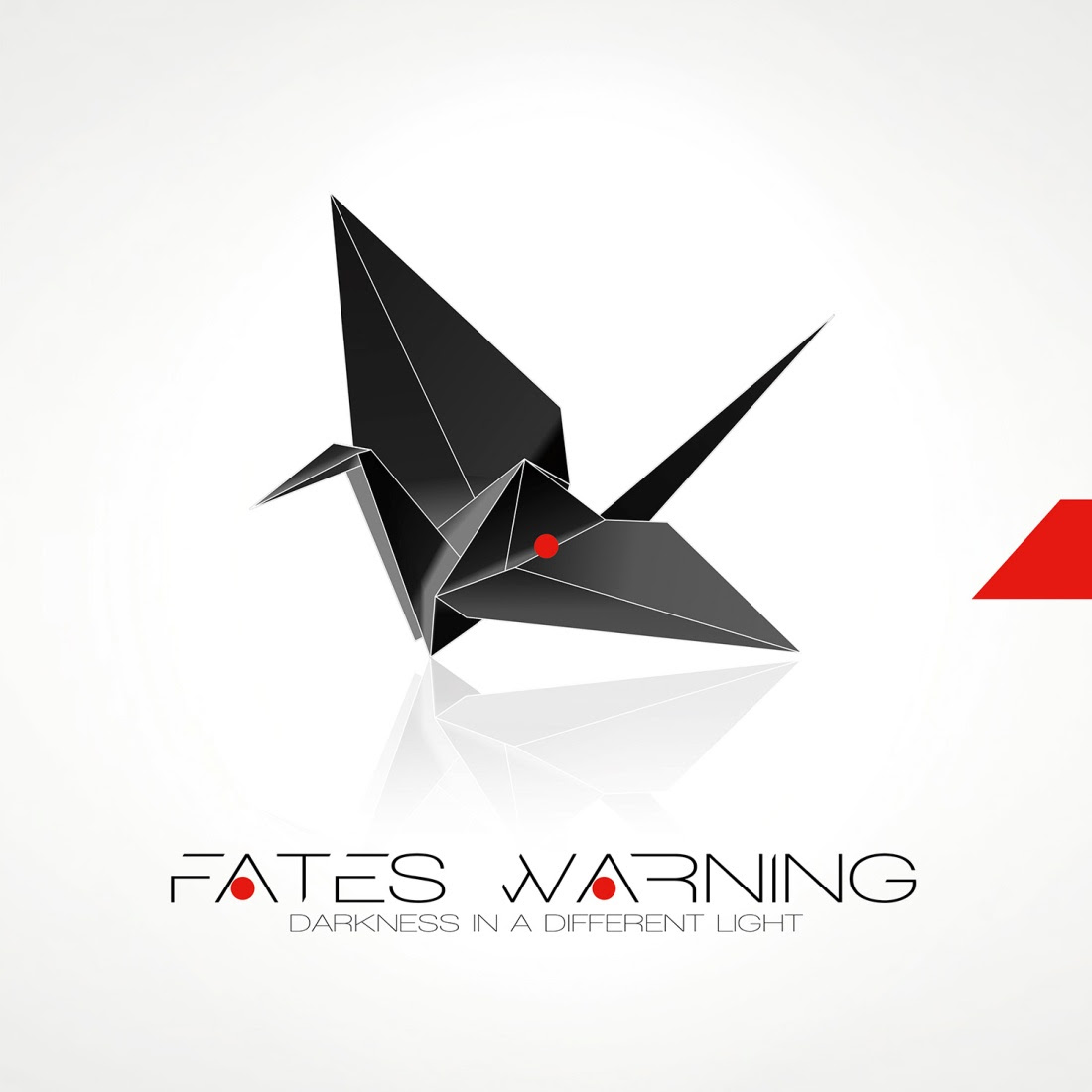 After almost a decade of silence from one of the giants of progressive metal, Fates Warning return with their 11th Studio album. What has changed in terms of band dynamics? Frank Aresti is back with the band! Additionally, the drummer has changed, replacing Mark Zonder, who has rejoined Warlord, with Bobby Jarzombek of Riot fame. Despite this decade of semi-retirement and the above changes, the band picks up exactly where FWX left off, in terms of both music and lyrical themes.
Going a little more in-depth, first, there is a heavier orientation compared to their previous works, not only  "FWX", exemplified by the introductory "One Thousand Fires". The guitars of Matheos / Aresti directly arouse the interest of the listener with Aresti giving new strength to the synthetic flair of Matheos. The famous lyricism of Fates Warning  is again the ingredient that boosts the album, with clear examples in the "Lighthouse" and the amazing 14-minute "And Yet It Moves "which closes-up  the album in a triumphant fashion.  Overall, an album worthy of the name and ambition of the band members. "Darkness In A Different Light" signifies that Fates Warning have returned and sound impressive and ready for new music adventures.

Below is the music video for "Firefly".

Posted by PhantomOfTheOpera at 21:19 No comments: 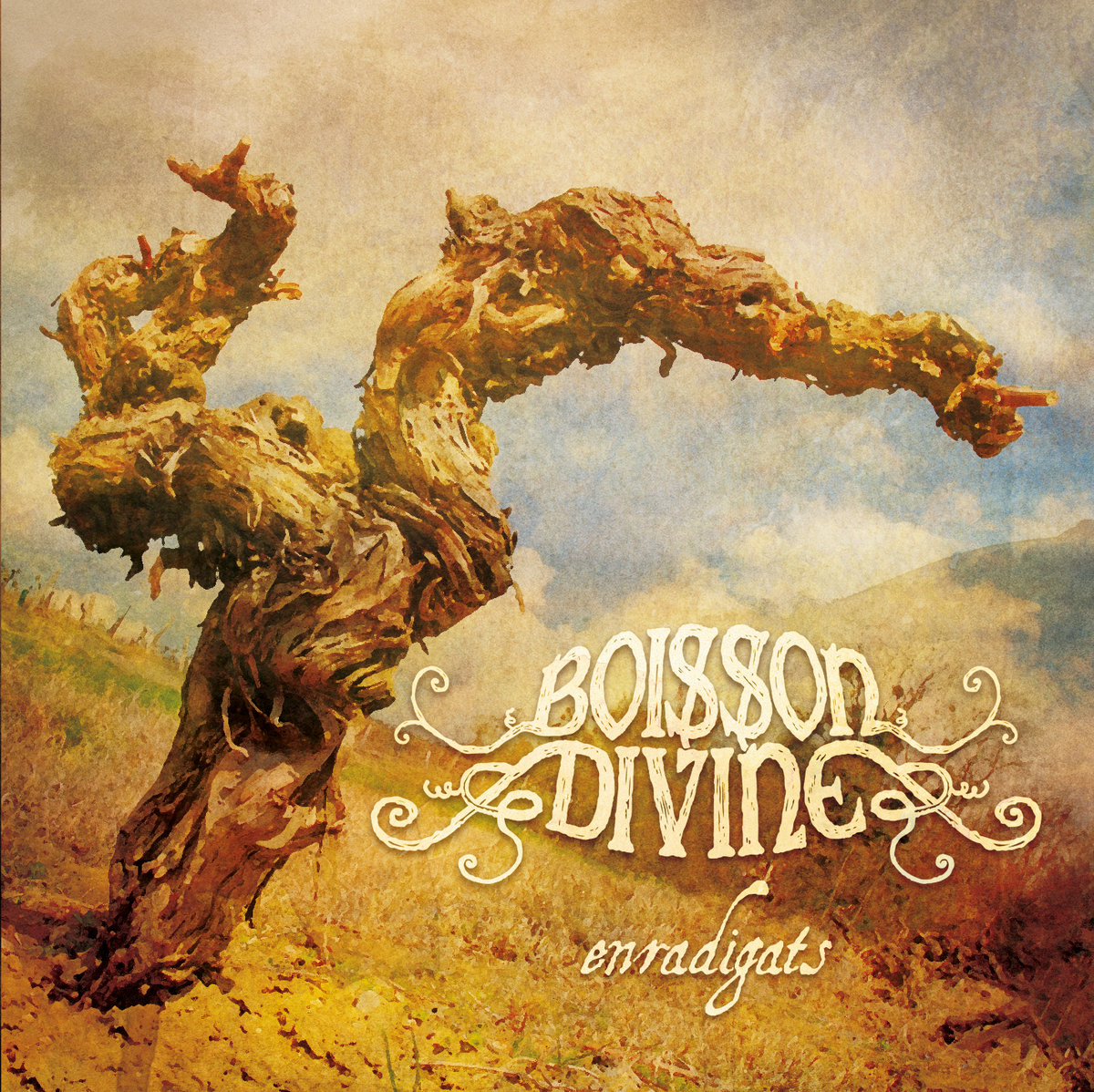 Boisson Divine is a French folk metal band that released their first album Enradigats entirely in their regional Occitan dialect (originating from Gascon in the French Pyrenees)! All the songs tempt to you to try to sing along (even if you don't know what you are singing about) and are full of joy and enthusiasm. The album has a strong and powerful vibe with songs about the band's land as well as their favourite sport, Rugby! Their excitement about the sport is also evident in their official video for the song named "Troisième mi-temps" where you can even see the players singing! This is an authentic album from a very interesting band that mixes great riffs, traditional instruments and manly vocals creating a heavy metal album that makes you look forward for more!

Below is the music video for the song "Troisième mi-temps".

Posted by the golden general at 14:02 No comments: 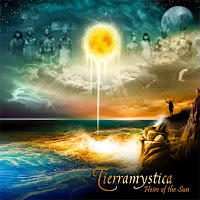 "Heirs of the Sun" is the second album of the Brazilian band Tierramystica and it overflowing with ethnic elements in both music and lyrical themes! The record draws stories from several cultures including Incas, Mayans and Aztecs that are perfectly combined with a range of instruments, including the ocarina, charango, craviola and bombo (played by multi-instrumentalist Ricardo Chileno who is also the main vocalist)! Although the indigenous instruments are present across the songs they do not reduce the power metal elements expected from a Latin-american band, with songs such as the “Gate Of Gods (Hayu Marca)” and “The Rise Of The Feathered Serpent (Quetzacoatl)”.  The “Essence Of Pride” and the “Myths Of Creation” also manage to balance the ethnic aspect with truly great riffing. The "Vision of the Condor" which is the opener song (following the instrumental intro "When the New Dawn Arrives ") is also a personal favourite from the album as it combines amazing acoustic breaks with guitar solos and great vocals!

Below is the official music video for the song "Vision of the Condor".

Posted by the golden general at 20:19 No comments:

In number 19 come the Psychedelic Doom Metallers Blood Ceremony with their third and more mature studio attempt, The Eldritch Dark.

Guitarist and main composer of the group, Sean Kennedy had previously classified the band as a "folkier" Sabbath.
Compared with the two previous works,production is cleaner and vintage guitars sound more old-school. Compared with its predecessor, the "The Eldritch Dark" is more well-crafted, yet less complicated and tricky. The album opens with "Witchwood", which has the most changes and summarizes in the seven minutes that it lasts all styles encompassed in the album. The single "Goodbye Gemini" is fast-paced and with a catchy refrain, but is not 100% representative of the whole album. "Lord Summerisle", is very reminiscent of Sabbath pieces in the vein of "Planet Caravan". The first of the two peaks of the disc belonging to the "Ballad Of The Weird Sisters" which is based on the prog / folk teachings of Jethro Tull, the other being undoubtedly "The Magician", adding equal pieces of early Floyd and Jethro Tull in the mix. The rest of the album is also flawlessly executed, even if less memorable than the songs described, at least for me.
If the aim of the album was to filter through their influences and, if possible, to expand their style, they manage it superbly well in "The Eldritch Dark".

Below is the music video for the single of the album "Goodbye Gemini".

Posted by PhantomOfTheOpera at 18:55 No comments: