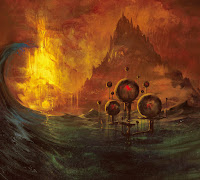 Initial Mass is a US based prog rock band,  releasing in 2018 their second full-length album "Tidal Force". The album kicks off with the lyrically engaging "Lights", sporting a very melodic chorus and amazing riffs."The Fountain" brings heavier and darker undertones along with more orchestral vocals that succeed in adding more layers to the song (being one of the most memorable moments of the album). "When It Rains" shows a more mellow side of the band, with a great slow-paced middle-section without missing out on metal sweetness! "Cold Air", a personal favourite, has an awesome intro, heavily based on the lead vocalist's (Mark Baldwin) skills reaching into a catchy chorus that is bound to stick to your mind. "The Shallows" adds a darker tone both lyrically and musically creating a more atmospheric vibe thanks to great keyboards layers. "Beyond the Shore" is an amazing change of pace showcasing again the lead vocalist with minimal music. "The Vessel" is one of those songs that are perfect to listen during a long drive taking you on a journey of its own. "Tidal Force", a behemoth of a title song (reaching slightly over 14 minutes)  starts with the sound of the waves reaching the shore with a great atmosphere developing over a blend of accoustic guitar riffs, great drum tunes and clear vocals! "The Flood" is packed with mellow vocals starting off slowing and building up to a heavilly drum-based ending (by Kevin Robertson) leading to the finale of the more keyboard oriented "Past Remains". An intriguing release from a very fresh band!

Below is the official music video for "Lights".