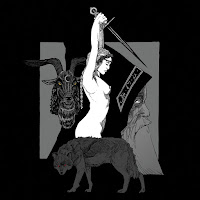 In number 22, we have the honour of introducing Old Wolf, a brand new heavy metal band from Kentucky that released their debut album in 2018. "Faustian Mass" is definitely an astonishing debut  incorporating epic heavy riffs throughout the album, starting with the appropriate scary narration over a thunderstorm in  the"Beyond the Void" intro. After setting the mood, no time is lost with the quick-paced "Executioner's Hymn" which also packs a sing-along chorus and the essential guitar solo interlude in less than 5 minutes! "Divine Heretic" has some more great guitar riffs by Jacob Wilson (lead guitar), while guitarist/drummer Jason Norfleet delivers some great drum beats. The band's skills in melodic paths are further showcased in "Trail of Tears", while the title-song "Faustian Mass" is without a question the highlight of the record with an amazing blend of epic heavy metal guitars and drums that fit perfectly with Ric Langford's appropriately rough vocals.  Follow-up "The Wisdom of the Black Flame" is a more straightforward heavy metal track while "Your Keeper" leans towards a more doom-based approach. The album takes a breather with the acoustic track "Gail" before closing with the heavily drum-based "Howl".
Overall, an awesome heavy metal album from an upcoming band with promising ideas and great heavy metal riffs!

Below is the music video for "Faustian Mass".