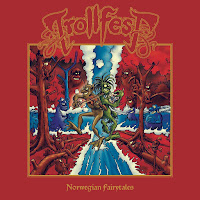 TrollfesT (stylised like that) are one of the most unique folk bands out there and yet for a long time they were thought of as a joke. The reason was that the band perceived themselves as such, thus rendering any serious purview of their music moot. And yet, here in their 8th(!) full-length release, the band finally seems to escape their "joke-band" self-imposed label. By no means does that mean that the record is devoid of humour, as these elements are still there, but they are superimposed by great music and a unifying theme on TrollfesT's take on Norwegian Fairytales. Balkan sounds, that were always a part of the band's strange mixture of Northern Folk with influences straight from a Kusturica movie, here have a much more prominent role, with heavy riffing taking a back seat. Additionally, we see tempo changes that were not that common in the previous works of the band, with final track "Nøkken og Fossegrimen spiller opp til midnattstimen " adopting  very nicely juxtaposed mid-tempo melody (with ethereal additional vocals from Mari Müller). Now, arguably the band will not be everyone's cup of tea, as the many shifts and turns of the music combined with the rough vocals Jostein Austvik might dissuade some from listening, but for trve folk metal fans that are into something fresh and not listening to the "tried and true" recycled ideas of many bands, "Norwegian Fairytales" will be ... an experience.

Below are the music videos for "Kjettaren mot strømmen" and "Fjøsnissens fjaseri", the first two tracks of the album - bear in mind it gets weirder further downstream!