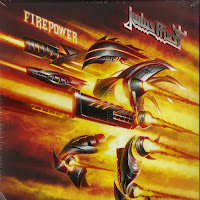 JUDAS PRIEST are back. While its predecessor felt like a middle of the road album for the metal gods, "Firepower" is really a great Swansong and a very metal "FUCK YOU" way of closing their illustrious career with a truly awesome and brutally metal farewell. When the band lost the classic guitar duo of Tipton and Downing (with Downing retiring all together and replaced by Richie Faulkner and Tipton not going on tour anymore and using producer Andy Sneap as a stand-in), everybody wrote them off. There was a widespread sentiment that following the lukewarm response to "Redeemer of Souls", the band would make a tour or two and then retire. But Halford and Co here raise their middle finger and unleash a metal apocalypse in what is probably one of the really rare exceptions of a historic band sounding so fresh and unapologetic for their music in their twilight years. Most (ecstatic) fans have agreed that the band has not sounded that good since Painkiller, twenty-five years before Firepower and it is here where they finally re-establish themselves in he pantheon of metal and reclaim their name as metal gods for now and forevermore. The album kicks off with heavy metal anthems "Firepower" and "Lightning Strike", grabbing the audience by the balls and keeps going with "Evil never Dies", only taking a small breather with "Never the Heroes" before putting the petal to the metal with "Necromancer". "Children of the Sun"' kicks off as power ballad breaking into a heavy metal crescendo around midway through the song and never looking back. "Guardians/Rising from the Ruins", starts with a piano  intro leading to the pretty epic "Rising from Ruins" part, which draws influences from the Nostradamus era of the band. "Flame Thrower" is a pretty fast and heavy song while "Spectre" has an exceptionally melodic solo in its middle part which is bound to follow the listener like a spectre (excuse the pun). "Traitor's Gate" is a fucking behemoth of an epic song with Halford howling and doom-like riffing pounding, while "No Surrender" is the fuck you of the band to all those saying that they should quit. The next track "Lone Wolf" has a more modern sound to it. bearing more resemblance to the solo Halford albums and is probably the weakest moment of the album. However finisher "Sea of Red"more than makes up for this, as it is once again an instant classic mid-tempo Priest song with all the emotional range that Halford can evoke through his amazing voice. If this is to be the final Priest album, they will go out with a hell of a bang!

Below are the music videos for "Lightning Strike", "Spectre" and "No Surrender" and the lyric video for "Never the Heroes".